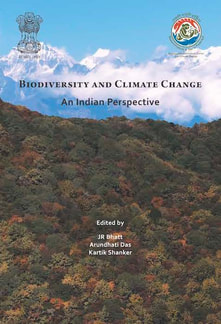 India is a biodiversity-rich nation that supports 18% of the world’s population on only 2.4% of the world’s total land area. Today, its biodiversity is also vulnerable to anthropogenic climate change. Remarkably, it holds parts of four global biodiversity hotspots that have high concentrations  of endemic taxa and some of  the biggest remaining wild populations of large, wide-ranging mammals. This book addresses the implications of climate change for existing conservation challenges in the Indian context, covering all major habitat types, including forests, marine, freshwater, mountain and urban ecosystems, as well as important ecosystem services such as food production and  pollination and plant phenology. It also addresses conflict between humans and wildlife and the spread of invasive species. It provides brief overviews of potential impacts on particular taxa that are known to be sensitive to climate change such as amphibians, freshwater fish, sea turtles, butterflies and birds. 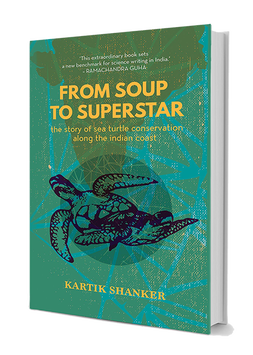 From soup to superstar: the story of sea turtle conservation along the Indian coast
​HarperCollins, 2015.

Sea turtles have been part of trade, folklore and mythology for over 2,000 years. In India, there were large- and small-scale turtle fisheries in Odisha and the Gulf of Mannar, while eggs and meat were consumed along the rest of the coast. Since the 1970s, several conservation programmes have been led in these regions by naturalists, scientists, activists and concerned citizens with diverse, often conflicting, approaches. From Soup to Superstar provides the first comprehensive account of marine conservation in India, focusing on sea turtles. Bringing together a range of issues and actors that have affected the world of sea turtles, filled with fascinating insights into scientific research and human-animal ecologies, this is a chronicle of the efforts that have been made to protect these mysterious creatures in the last fifty years. See reviews.
​ 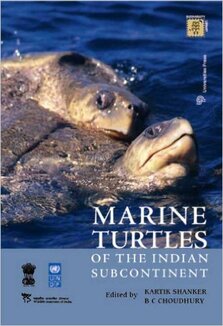 Marine turtles of the Indian subcontinent
Edited by Kartik Shanker and BC Choudhury
​Universities Press, 2006.

This book documents the results of surveys carried out under a national sea turtle project support by the Government of India and UNDP. It includes status surveys along the east and west coasts of the Indian mainland, the Lakshadweep archipelago and the Andaman and Nicobar Islands. It also provides overviews of the status of marine turtles in Sri Lanka, Pakistan and Bangladesh. There is a review of fishery-related issues, including causes and effects of incidental mortality and potential solutions like turtle excluder devices as well as reviews of conservation efforts and legislation and international instruments pertaining to marine turtles. There are also accounts of research on the biology of marine turtles and efforts to conserve their habitats. It includes contributions from leading experts in the ecology and conservation of marine turtles from India and abroad: contributors include Bivash Pandav, Biswajit Mohanty, Jack Frazier, Belinda Wright, Rom Whitaker, among others.