For much of its history, community ecology has placed far greater emphasis on negative interactions, such as competition and predation. Only recently has the importance of positive interactions gained theoretical and empirical attention. Heterospecific (or multi-species) grouping, though widely prevalent, has been excluded from mainstream research on sociality, probably because it is seen as qualitatively different from conspecific sociality. Research in our lab examines both positive and negative interactions in different model systems including mixed-species bird flocks in tropical forests and schools of marine reef fish, and is one of the few (perhaps only) labs in the world that examines these patterns in both terrestrial and marine systems.

​In addition to primary work, we contributed to a global review of mixed species grouping which provides a theoretical framework for understanding flocks. reviews costs and benefits and explores consequences for ecology and evolution (Goodale et al., Biological Reviews, 2020). The  theoretical framework provides a two-dimensional space to describe all kinds of groups, including single species groups at one end of the spectrum. We expect this to underpin ongoing and future research in this field. 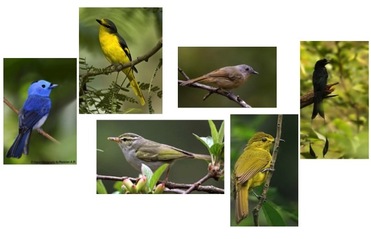 Mixed-species flocks of terrestrial insectivorous birds are amongst the best-known examples of heterospecific sociality. Flocks are found all over the world, in a variety of habitats, and include a unique suite of species in each area.  Although flocks are well-studied, most of the research has been descriptive. In other words, while we have descriptions of the richness, size and composition of flocks from many areas, we know little about why and how flocks form.

Hari Sridhar's thesis focussed on understanding the causes of flock formation, and its consequences  on community organization. Hari's work, which was based on both secondary analysis as well as primary data,  led to several important findings. Based on a global analysis of flocks from over 50 datasets, Hari found that, on the average, birds associate more often with hetero-specifics that are similar to them in body size and foraging guild, and more closely related to them (phylogeny)(Sridhar et al., American Naturalist, 2012). Using a novel approach by examining two species flocks, Hari also found that intra-specifically gregarious birds were central to flocks - they were found in flocks more often than expected by chance, were more likely to be joined by other birds, and were almost always followed by other species (rather than the reverse)(Sridhar and Shanker, Oecologia, 2014).

Priti Bangal is continuing our work on mixed species flocks as part of her PhD, which aims to examine the role of species interactions in bird flocks. She is exploring both benefits provided by intra-specifically gregarious species, as well as the trade-offs associated with sallyer species such as drongos. Her work shows that small flocks assemble deterministically, with participants being similar in body size, but larger flocks resemble random assemblages (Bangal et al., in review,). Moreover, participants in mixed-species flocks can separate on different axes of trait similarity thus gaining benefits from similarity on one axis and mitigating competition by dissimilarity on others, providing a fundamental explanation for the formation of these groups. Several Master's students (Priyanka Hari Haran, Somdipta Sen and Zakhiya PC) have also worked on mixed-species flocks. 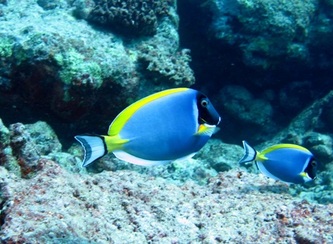 Following a conversation with Umesh Srinivasan, we thought it might be interesting to extend our work on mixed species foraging to reef fish. To our amazement, we found that precious little work had been done on the subject. And even more surprising, many marine biologists seemed uninterested in the phenomenon.

​Anne Theo initiated her PhD on mixed species reef fish groups in the Lakshadweep and has observations on more than 1800 groups across 4 islands, both on the reef and in the lagoon. Her work explores broad scale clusters, drivers of hetero-specific grouping and community level patterns. She has some very interesting results that we expect to publish in the near future. Bharat Ahuja will continue this work for his Ph.D. in the Andaman and Nicobar Islands. 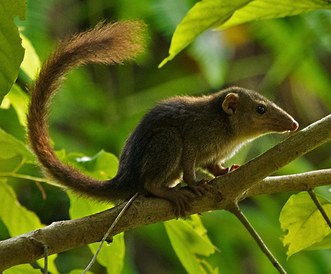 ​In the early 2000s, Meera Oommen conducted a study of the Nicobar treeshrew at Galathea on Great Nicobar Island, collecting data on the behaviour and habitat use of this little known animal. During her observations, she found that the treeshrew was involved in an unusual foraging association, which included racket-tailed drongos but also a sparrowhawk. The sparrowhawk was large enough to predate on the tree-shrew, but seemed content to wait for prey that the tree shrew flushed out while it was gleaning the bark for insects, much as the drongo was doing. Our analysis indicated that the drongo somewhat mediated the association, as the treeshrew appeared to 'tolerate' the sparrowhawk more when the drongo was also present. Anecdotal observations suggested that the drongos mimicked the treeshrew contact calls to locate them in the morning, and knew their spatial pathways. Unfortunately, we have not been able to follow up on this work after the 2004 tsunami. However, two ecologists (Shashank Dalvi and Vishnupriya Sankararaman) visited Great Nicobar in 2015 and observed all three players, but didn't see them foraging together.